The Church of the Open Range:
​St. Paul’s of Fort Benton
By Ken Robison

​One hundred fifty years ago, in 1867 Bishop Daniel S. Tuttle brought the Episcopal Church to Montana Territory. Bishop Tuttle rode horseback to the mining camps and frontier towns. He visited Fort Benton many times over the years, and preached his first service in the river boat town in an abandoned saloon, the Frontier Club Room.

In the words of the Great Falls Tribune, Bishop Tuttle’s first sermon in Fort Benton “was delivered in an abandoned saloon building, which in itself was a remarkable thing as very few saloons were abandoned in those days.” In July 1876 Tuttle held services in the Thwing Hotel, the next year in the Centennial Hotel, followed by services in the school house and the courthouse.

Finally, in the fall of 1879 Bishop Tuttle established an Episcopal congregation in Fort Benton, becoming one of the first three congregations of that church in Montana Territory. Reverend S. C. Blackiston arrived in Fort Benton in 1879 as resident pastor, and he began weekly services in the old court house on Main Street. Blackiston had experience as a “church builder” in his earlier assignments.

Bishop Tuttle named a powerful committee of Fort Benton ranchers and businessmen in August 1879 to build a church: President-William G. Conrad, Treasurer-Joseph S. Hill, Secretary- A. B. Kester, Charles E. Conrad, William H. Todd, Joseph A. Baker, Frederick C. Roosevelt, William S. Wetzel, Charles Duer, and Paris Gibson.
The roof is a steep pitched gabled roof which is shingled. Twin chimneys protrude from the rear wall and on the ridge between them is a large Celtic cross. Near the front a third chimney cuts through the side of the roof and on the front wall at the ridge line is a fourth chimney. The entry is a low brick vestibule with its own gabled roof and smaller cross on the ridge. Two small leaded glass lancet windows are on each side with double doors and a leaded glass lancet window surmounts the doors. All windows are arched with the brick corbelled out, the sills are all brick, A low brick room is attached to the front wall; it has a shed roof and was built as part of the original church. 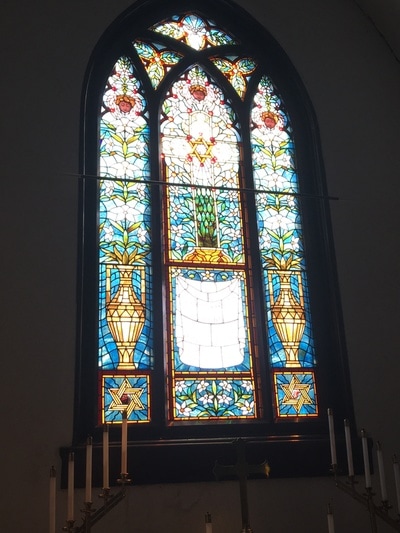 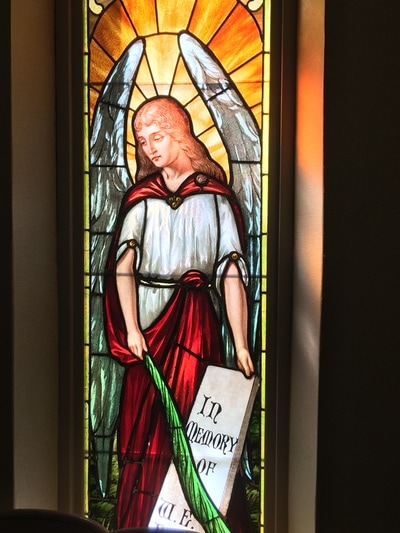 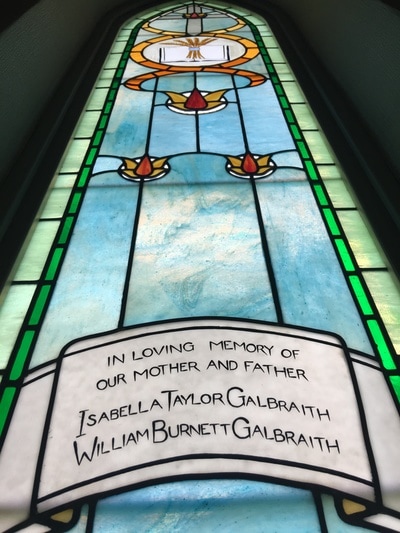 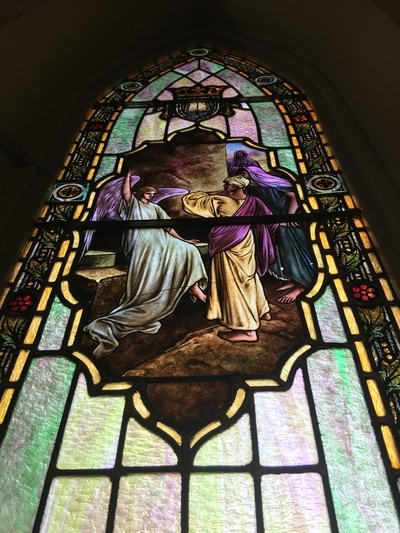 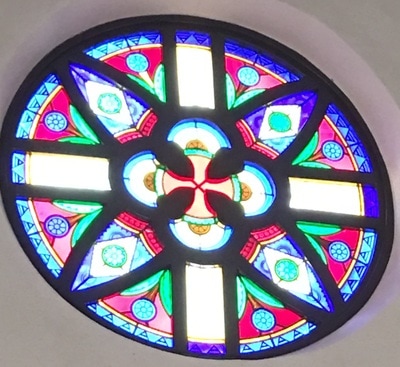 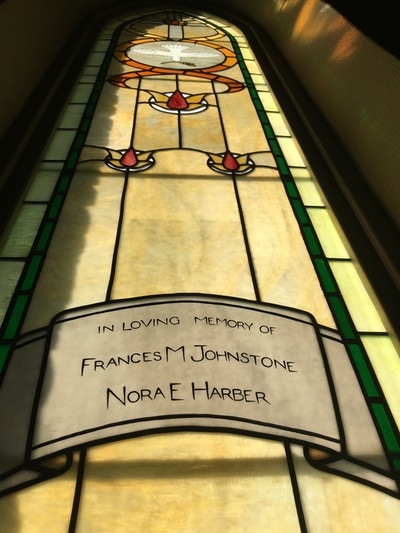 Click on the pictures above for a larger view
The interior of the church has an open ceiling to the rafters and is lather and plaster, and the walls are lathe and plaster. There is a three-foot wainscoat. In order to form the chancel, two small rooms were placed on each side with doors opening into the chancel. Each has a small lancet window of leaded glass above the doors.
St. Paul’s Episcopal Church is significant as the oldest Episcopal Church in continuous use in Montana, and also as Fort Benton’s oldest church. While a wood-frame Catholic Church was completed several weeks earlier in the summer of 1881, that church burned on December 31, 1905. Architecturally, the church is distinct as an example of a high gothic-like steep gabled church with stained glass lancet windows. St. Paul’s is an exceptional example of a small community church built in Montana as it evolved from a fur/robe trading post into a settlement of merchants with their families bring schools, churches, social establishments, and theater to this wild frontier town. 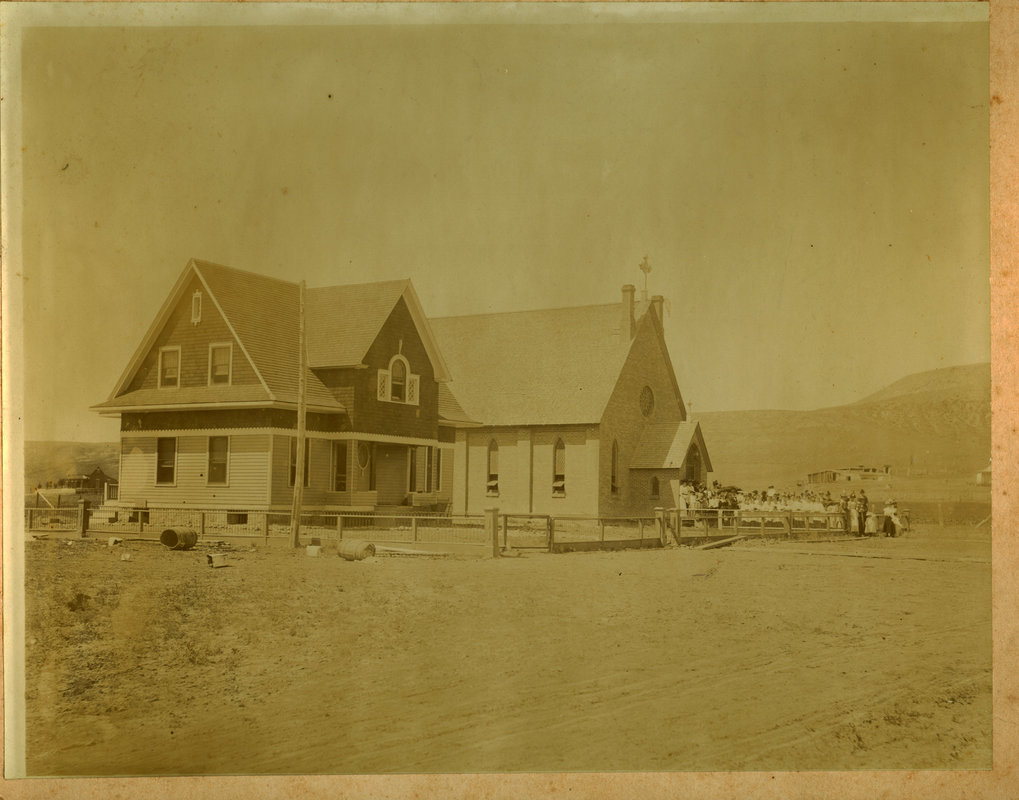 Photo taken in 1897 showing St. Luke's Church, the congregation, and the Rectory shortly after its completion.
The River Press of August 10 reported the first services in new St. Paul’s on Sunday, August 7, 1881: “Services were held for the first time in the new Episcopal church last Sunday and a large congregation was in attendance, every chair in the spacious room being taken. The church had been beautifully decorated by the ladies of the congregation and it presented a very attractive appearance. The sermon by Rev. Blackiston was an able effort and the services throughout interesting and impressive. This new house of worship, one of the finest in the Territory, is a great credit to Benton.
“This little book carries a deep personal meaning for me, as my mother and father, Mr. and Mrs. Wm. H, Todd, were among those hardy pioneers of old Fort Benton who worshiped in private homes, the old Overland Hotel, abandoned adobe buildings, or any other spot where services might be conveniently held, prior to the building of St. Paul’s. One of my earliest remembrances as a boy was hearing my father and mother tell of occasions when the saintly Bishop Tuttle celebrated Holy Communion in the tiny home, on the river bank close by the old ferry landing, where I was later born.

“The excerpt from the Church Record, on Page 3 of the Anniversary Book, also carries a special personal message for me as I was one of those nine children baptized on that day of August 7, 1881, and I have in my possession the Baptismal Certificate signed by the Rev. S. C. Blackiston. It would be most interesting to know if any more of this group of nine are still in the land of the living, and where they are located.”

“I received the greatest aid from my music. In those days I sang in churches and at the infrequent concerts. Through the courtesy of Mr. William Conrad a carriage was sent for me every Sunday, to take me to the Episcopal church, where I often served in the double capacity of soloist and accompanist. This was during the rectorship of both the Reverends Blackiston and Clowes. On one or two occasions I was nearly the whole congregation.

“There was no organ in the church, a melodeon serving instead. As this only covered four octaves, there was no opportunity for fine instrumentation. On the contrary, the accompaniments of my songs had to be curtailed to meet the possibilities of the melodeon. Mrs. Lippert was the regular organist.

“Occasionally the choir was improved by the addition of a new member. One of these was Mr. Griffith, a civil engineer, who possessed a fine tenor voice, and formerly sang in a Brooklyn, N. Y. church. He also aided in giving one or two concerts while in Fort Benton.

“. . . There were several denominations striving to gain a foothold in the town. The Catholics were early established there, being the first on the ground, and this when Fort Benton was a post of the American Fur company. The Rev. Jacob Mills was in charge of the Methodist church, and the Reverend James of Minneapolis struggled vainly to breath the breath of life into a Congregational organization. Reverend Leonard, who was Congregational missionary for Wyoming, Utah, and Montana, often visited the town. He was a clergyman who always carried with him a copy of some Shakespeare play, and kept himself well posted in what was going on in the world of religion, literature, and politics.

In mid-February 1883 Rev. Blackiston resigned his position at St. Paul’s and moved on to the booming mining camp of Butte, where he soon built the finest church in this new city. The Reverend C. S. Fackenthal, a native of Iowa, arrived in Fort Benton in early November, 1883 with a reputation as a fine rhetorician, elocutionist and pulpit orator.
A major restoration of the church building was completed in 1975 as a project of the Fort Benton Community Improvement Association. At that time the exterior had a two-foot-high concrete curb poured around the base to protect the soft brick from water deterioration. This is the only addition since its original construction. The building was restored, inside and outside, with a National Park Service Historic Preservation Grant and funds raised by the congregation. As a national historic site, the church is now owned by the city, but it is to be maintained as an Episcopal church perpetually.
A structural walk-through inspection of the church in July 2013, determined that St. Paul’s had withstood a variety of climate and moisture changes during its 130-year life span. More recent building movements made it apparent that the building foundation appeared to be moving, resulting in a large amount of cracking throughout the structure. The inspection recommended repairs ranging from soil stabilization to tightening tension tie rods to repointing and resealing bricks and mortar. ​

Today, St. Paul’s is the oldest Episcopal Church in continuous use in Montana, and a tiny congregation keeps it going. The necessary repairs have not been completed, and without major fundraising, beyond the capacity of the congregation, tragically, St. Paul’s Episcopal Church is endangered in the long run. Help save this historic church and beautiful Fort Benton landmark.